Underground Istanbul hides many secrets. Among them is Theodosius Cistern (Şerefiye Sarnıcı), an ancient water reservoir that was part of the grand Byzantine water system.

Imagine, this structure is almost 1600 years old. The Theodosius Cistern is located in the central tourist district of Sultanahmet. It was opened in May 2018. There is little information about it in guidebooks and there are no queues or crowds of tourists. Let’s tell you about this secret place in Istanbul. How to get to Theodosius Cistern, ticket price, opening hours, our review and impressions.

A cistern is translated from the Greek as “reservoir”. These underground reservoirs were usually built at the end of branches of an aqueduct.

Water was accumulated in them, stored and then transported on to palaces, thermae and city fountains. It is interesting that Constantinople (now Istanbul) was the only city in the Roman Empire where the reservoirs looked like real palaces.

A bit of history. In 330, during the founding of the capital of New Rome, Emperor Constantine paid great attention to the construction of a water supply system. The centre of Constantinople was supplied with drinking water by the city’s main aqueduct, the Bozdoğan (Bozdoğan Su Kemeri). It was built in the 370s, during the reign of Emperor Valentus.

By the way, the Aqueduct of Valenta is still standing. Until the middle of the 19th century it was still used to bring water into the city. Today the Bozdoğan Su Kemeri Aqueduct is one of the symbols of Istanbul. Ataturk Boulevard runs underneath it. 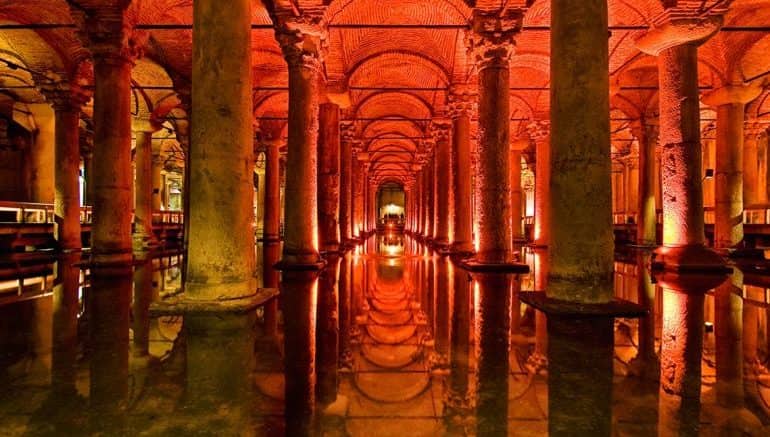 Constantinople’s water supply had a large branching system. More than 40 ancient cisterns have now been found in Istanbul, but only a few of them are open to tourists. On your trip to Istanbul you should see the Theodosius Cistern. There are few people in this underground tank, even though the museum is only 10 minutes from the bustling historic Sultanahmet Square.

How to get to Theodosius Cistern The underground reservoir was built in 428-443, at the time of the Byzantine emperor Theodosius II and is named after him. There is a version that Pulcheria, the emperor’s sister, was involved in its construction. It is one of the oldest reservoirs in Constantinople. In ancient times, the underground reservoir was also called Constantine’s Cistern, and since the 19th century it has been called Serefiye Cistern (Şerefiye Sarnıcı).

The Theodosius Cistern received water from the Valentine Aqueduct (Bozdoğan Kemeri). Here it was stored and supplied to the thermae, city fountains, temples and the Great Palace of the Byzantine Emperors. It is believed that the Theodosius cistern was connected to the neighbouring Floxinia cistern (Binbirdirek Sarnıcı), which in turn was connected to the Basilica cistern (Yerebatan Sarnıcı). During Ottoman rule, the cisterns were abandoned.

The site once housed the Eminönü Municipality building. In 2010 it was demolished and restoration works began. A modern glass building was erected over the reservoir. In May 2018, the new Feodosia Cistern Museum (Şerefiye Sarnıcı) opened. The ancient underground reservoir now hosts artists’ exhibitions and classical music concerts. 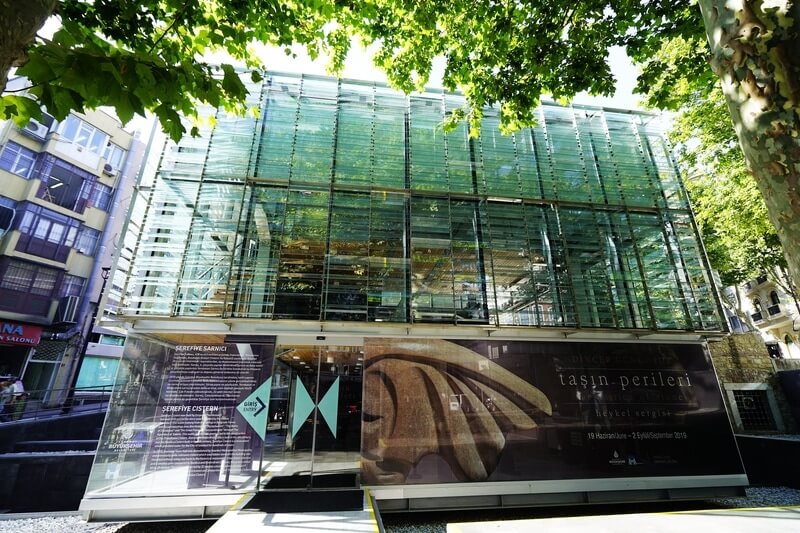 Theodosius Cistern is older than the famous Basilica Cistern and the lesser-known neighbouring Philoxenus Cistern, but it is the smallest of them all. Its dimensions are 45 by 25 metres.

Every Saturday at 17-30 there are acoustic concerts in the Theodosius Cistern.

For up-to-date news and concerts, visit the museum’s official website

Entry Fee: For foreign tourists, the ticket price is 150 liras