Istanbul is known as a Muslim city. Surprisingly, it is home to the spiritual centre of world Orthodoxy. St George’s Patriarchal Church in Istanbul is the main cathedral of the Ecumenical Patriarchate. For more than 400 years it has been the seat of the Patriarch of Constantinople.
Not far from the Cathedral you can see the only iron church in the world. Surrounded by the colourful urban area of Fener with the remains of once luxurious houses. How to get to St. George’s Patriarchal Cathedral in Istanbul. Its history, relics and legends are explained in this article. 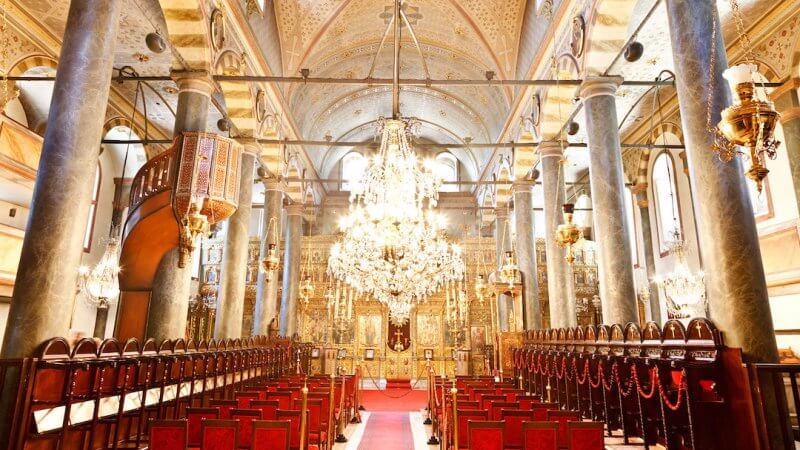 Did you know that Christianity came to Istanbul (then Byzantium) before 38 AD. The founder of the new religion in the city was the Holy Apostle Andrew, a disciple of Jesus Christ. He became the first Byzantine patriarch. (By the way, St. Andrew is considered to be the founder of Christianity on Ukrainian soil. Legend has it that St. Andrew stood on a mountain over the Dnieper and predicted the appearance of the glorious city of Kyiv.)

In 330 the city of Byzantium became the new capital of the Roman Empire, and later the Byzantine Empire. It was renamed Constantinople in honour of its founder, Emperor Constantine the Great. He built palaces and Christian temples here. The patriarchs of Constantinople held high status. The title ‘Ecumenical’ came into being in 451 after the Fourth Ecumenical Council, and equality with the pope was also proclaimed. In 1054, the centuries-long conflict between Rome and Constantinople led to a split of the Christian Church into Orthodox and Catholic churches. This took place in the Cathedral of St Sophia (Hagia Sophia).

The patriarchate founded new churches all over the world. From Constantinople (Tsargrad) the Christian faith came to Kievan Rus. In the 860s, Patriarch Photios first baptized Prince Askold of Kiev and opened a new metropolitanate in Kiev. In 100 years in Constantinople accepts a christening of princess Olga. And only in 988 her grandson, Prince Vladimir Great, christened the Kiev Russia.

The Fener district of Istanbul.

St George’s Patriarchal Cathedral is located in Istanbul’s Fener quarter, which is part of the Fatih municipal district. Fener (Fener, or Fanar) is a name easy to remember and has a history of its own. In Byzantine times, there was a lantern hanging from a high column on this bank of the Golden Horn. It served as a lighthouse. “Fener” translates from Greek as lantern, from Turkish as “lighthouse“. Hence the name of the area. (It turns out that the Bulgarian word “Fener” and the Russian “lantern” are borrowed.)

Greeks have lived in this small area since the Byzantine period. During the occupation of Constantinople by the Ottoman army (at the beginning of the 15th century) they did not resist and so saved their houses and churches from destruction. Subsequently, the Turkish authorities converted the temples into mosques anyway. Only the Church of Maria of Mongolia remained for centuries the only parish church of the Greek community in which services were held. It did not become a mosque. The Patriarch of Constantinople held an important position in the Ottoman Empire. He was the head of the whole Christian denomination in the country. Around the residence settled wealthy aristocratic Greek families. The district of Fanar became the centre of the Greek community of the Empire. The inhabitants of the area were called “Phanariots” and the Patriarchate was called “Phanar”. Members of the noble families occupied positions in the Patriarchate’s administration and sponsored its activities. In the 18th century, wealthy Fanariots were appointed governors of Moldova and Wallachia by the Sultan.

In the 20th century the Greek minority in Turkey was severely persecuted. In September 1955, another and largest pogrom of Greeks took place in Istanbul and other cities. Houses and schools were destroyed and churches burned. After these events, most Greeks left. From a community which in 1923 numbered more than 200,000 people, almost 3,000 ethnic Greeks remained in Istanbul. Thus ended the two-thousand-year history of the city’s Greek community. The Fener district was settled by Turks. There are still many old dilapidated houses next to restored residential mansions. The photo shows the street leading to the Patriarchate.

How to get to the Patriarchate

It is about 2 km from Eminenyu Pier to St George’s Cathedral. You can get there by bus or by vaporetto. The bus stop and the right vaporetto pier are on Eminenyu Square, to the left of Galata Bridge (when looking at the opposite bank and Galata Tower).

First you can visit the world’s only surviving Iron Church. On the banks of the Golden Horn, 300 metres from the pier and bus stop, rises the elegant St Stephen’s Church. It belongs to the Bulgarian religious community, which appeared in the town in the 18th century. The first wooden church on this site was opened in 1849. It was consecrated in honour of the first martyr St. Stefan.

It was converted from a house that was given to the community by Prince Stefan Vogoridi (Bogoridi), a Christian, adviser to the Turkish Sultan and Voivode of Moldova. The temple became the centre of the religious and cultural life of the Bulgarian community and a school and a printing house were opened there. Here the autocephaly of the Bulgarian Church was proclaimed. 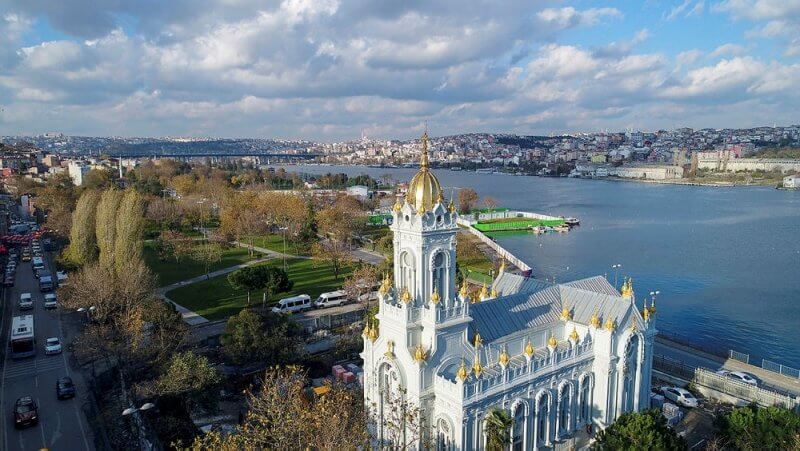 In 1898 a new church – a unique one made of iron – appeared on the site of the old one. It was created by an Austrian firm to the design of an Armenian architect. The metal elements of the future temple were delivered from Vienna to Istanbul by ships along the Danube, the Black Sea and the Bosphorus. The parts weighed almost 500 tonnes. The new St. Stephen’s Church was assembled almost like a construction set, only “heavyweight”. The body was made of steel, the walls were made of tin. The exquisite carved wooden iconostasis is installed inside. The interior decoration of the temple was the first example of the Art Nouveau style in Istanbul.

The construction of such ironwork temples was a British invention of the 19th century. Such churches were transported and installed in the distant colonies of the country.  They became a trend of the era. An iron church was even built in Kiev (the Church of St John Chrysostom – now a square near the Kiev circus). Today St Stephen’s Church in Bulgaria is the only preserved iron church in the world.

The Patriarchal Church of St George

Today the Orthodox Church has almost 300 million believers worldwide. It consists of independent local churches. Among these, the Patriarchate of Constantinople is the “first in honour”, the “big brother”. It represents Orthodoxy in the world, preserves its canons and history, coordinates its work, and acts as arbiter. The Ecumenical Patriarch has the right to grant autocephaly to the churches of different countries.

The Cathedral of Saint Gregory (Jurij) is the Cathedral of the Ecumenical Patriarchate. It was here on 5-6 January 2019 that an important event took place – the signing and receiving of the Tomos of autocephaly for the Orthodox Church of Ukraine.

Entrance to the Ecumenical Patriarchate complex and St George’s Cathedral (Turkish: Aya Yorgi Rum Patrikhane Kilisesi) is free. There are strict security controls in place. The main gate is always closed in memory of Patriarch Gregory V. This is where he was brutally murdered on Easter Sunday 1821, suspected of collusion with Greek revolutionaries. 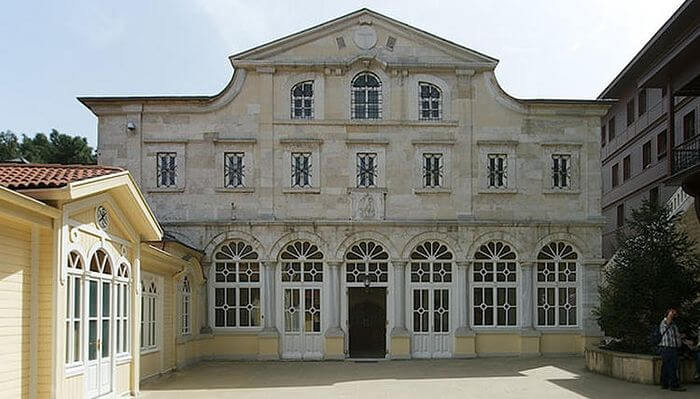 St George’s Cathedral was part of the Women’s Orthodox Monastery, into whose buildings the residence of the Patriarch of Constantinople moved in 1601. Almost 420 years have passed since then. Over the centuries the Church has suffered several major damages due to fires and earthquakes. But each time it has been rebuilt. The last reconstruction of the church was in the early 1990s.

Next to the Cathedral new administrative buildings of the Patriarchal Residence were erected. The Ecumenical Patriarchate complex also includes a library, a treasury and the Patriarch’s chapel. To the left of the Cathedral is the Pavilion for the Holy Peace. According to a long tradition, the world is consecrated there during Holy Week, which is then taken to the various churches for the administration of the sacraments.

Entrance is free. You must adhere to the dress code at the entrance: shoulders and knees covered, covered head for women. Website