Today we will tell you about the historical passages in Istanbul – the shopping galleries with glazed ceilings, which were especially popular in the 19th century. Many of them are still accessible today. The most famous one is the Cicek Passage or Flower Passage.

One of the richest in historical buildings and attractions is Beyoglu, with its famous Istiklal Street and Galata neighborhood.

Istiklal is a real treasure trove of history and unique places can be found at every step. Among them: churches hidden from the eyes of passers-by and the bustle of the avenue, cafes with a long history, the buildings of embassies and consulates, khans, some of which have been restored and are available to visitors. But in many ways, the appearance of Istiklal Street was influenced by the construction of arcades. Passage, from the French word passage, was a passageway with stores and stalls on both sides. In 1901, under the initiative of the Syrian Hasan Halbouni Pasha and Mehmed Abdul Pasha, under the direction of the architect Dimitros Basiladis, three separate buildings were built which were later merged into a single passageway, the Cité de Syrie. As in the other passages of Beyoglu, it housed tailors, florists, headdress makers and cloth merchants, and book departments.

The double elevator system was tried out for the first time in Syrie Passage. Tarihî Santral Sineması, a movie theater, was also opened there.

As the Elhamra Passage, Syrian Passage is also included in the list of protected cultural sites and is a part of Istanbul’s historical architecture.

Today, already an integral part of the arcade, the unique retro clothing and costume gallery store ByRetro has become an integral part of the arcade. It is a huge area (the second largest retro store in the world) and countless closet items, accessories and things from everyday life of yesteryear: shirts, pants and skirts, bags and gloves, outerwear, corsets and tails, wedding and ball gowns, hats with veils and glasses, old TVs and phones, antiques – the list is endless.

It is in this retro gallery dress stars of Turkish TV series, use the material for photo and video shoots.

All lovers of such places is unequivocally recommended to visit. Mothballs will be guaranteed:) 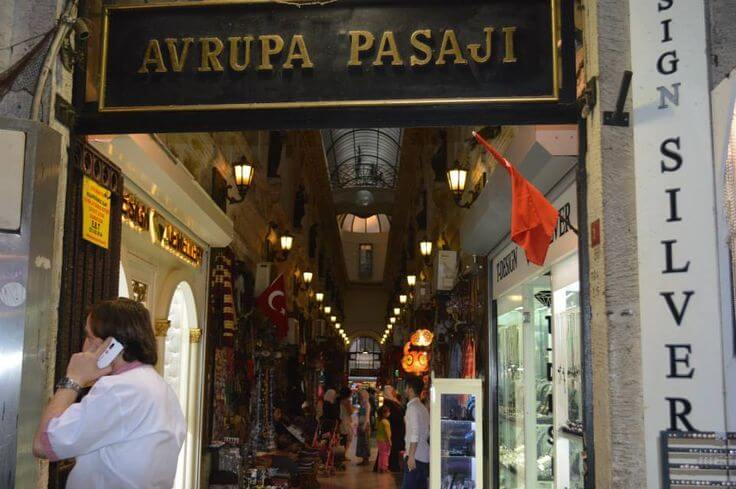 Earlier, there was a café garden called “Jardin des Fleurs”, but it was destroyed by a fire. After that, in 1874, a three-storey European arcade, also called the mirror arcade because of its interior decoration, was built by the architect Dominique Pulcheur. Earlier, in front of each mirror there were gas lamps, which gave the passage an unusual and mysterious look. It had a total of 22 stores and housed a shoe maker, tailors, a couple of barbers, a grocer, a haberdasher, a soap and carpet counter, a watchmaker, and florists.

During the construction of this arcade in Istanbul, the design of the French arcade of Choiseul was used as a basis. Marble, glass, gilded finishes and elaborate statues are everywhere. Every corner of the arcade is a photo area for tourists.

Turn right from Istiklal Street when you get to the Galatasaray Lyceum (it will be on the left). After a minute you will be near the entrance of the European Passage. 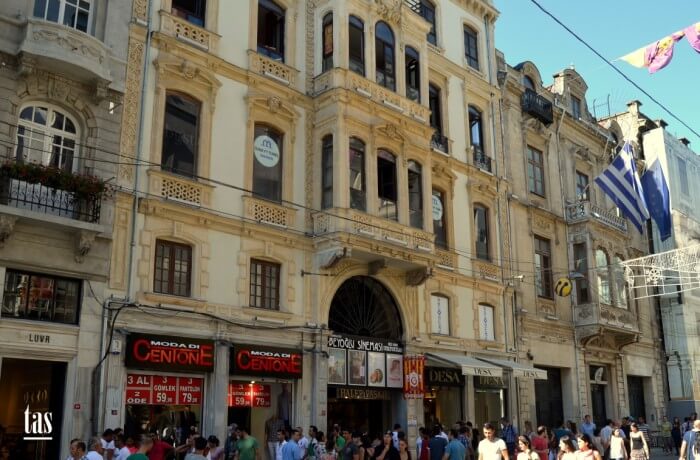 For 87 years, the building has housed a theater-circus Variety (Varyete Sirk Tiyatrosu), and in 1989 the Beyoglu Cinema opened. In doing so, in order to redesign the premises, the departments of the 13 shops were completely removed from the lowest floor, which, of course, caused some misunderstandings and indignation.

In its first year of operation, the cinema became the venue for the Istanbul International Film Festival and continues to be so to this day. 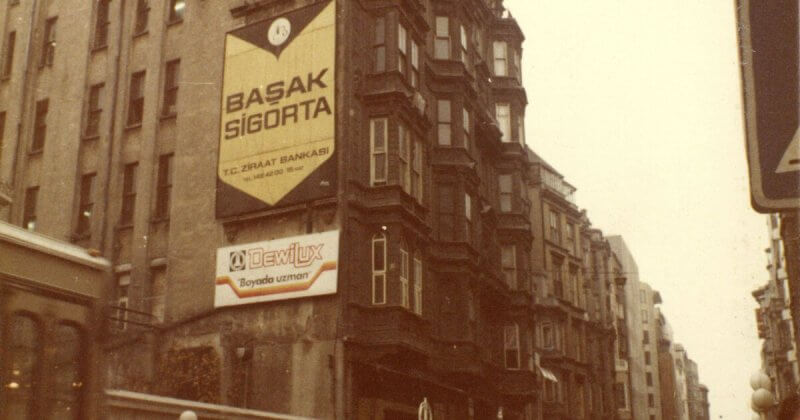 The Rumi Passage was designed by Ragıp Sarıca Paşa, the same architect who designed the Sirkeci train station.

Rumeli Passage was designed by August Carl Friedrich Jasmund, the same architect who designed the Sirkeci train station. When it was completed in 1890, it was the tallest building in Istiklal Street, called Cadde-i Kebir. It had nine floors, 58 apartments, 30 shops and three doors, one on Istiklal, one on Nana Sekak and one on Maledji Street.

Rumeli Passage also housed bakeries, jewelers and tailors. The famous Abdulla Efendi restaurant was open here from 1920 to 1968 and became even more popular in 1960 when stamps collectors started to buy in the stalls.

Incidentally, for a time the arcade housed the Rebul Drugstore, the ancestor of today’s Atelier Rebul chain of perfumes and cosmetics. Its creator was Jean Cesar Reboul, after whom the brand is named. Kemal Müderrisoğlu, one of the first pharmacists at the time, and today his son, pharmacist Fatih Mehmet Müderrisoğlu, continues his work at Rebul.

A couple of years ago, you could get a coffee inside the historic arcade, but at the moment, the main doors of the building are mostly closed. The passageway, often unnoticed by tourists, was built in 1871 on the initiative of the merchant Hacopulo. For a long time, it housed the shops of headdress makers, button and button makers and yarn sellers. Later, the passageway was a meeting place for writers, reporters and poets. For example, the printing house of the Turkish writer Ahmet Mithat Efendi was located here.

Inside the arcade is the Hazzo Pulo Restaurant & Şarapevi, which has been open for more than 150 years. After a stroll along bustling Istiklal, you can enjoy Turkish food and local wine in an establishment with a long history.

Despite several restorations, the inside of the arcade has been preserved in its original style, except for the shop windows. 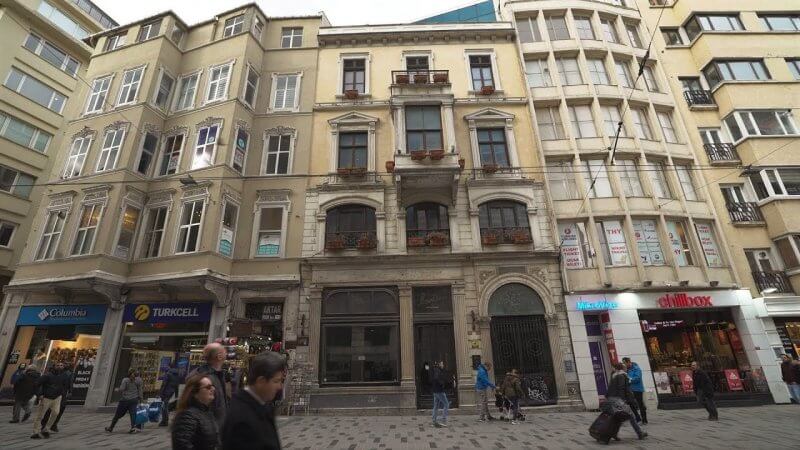 The Oriental Passage, better known among locals as the Eastern Mirror Passage, was built in 1840.

There were many departments and shops: the famous Koehler Kardeşler publishing house, Mandus Matbaası, Kristich hairdresser’s, Mulieri tailor, Kalagas yarn and yarn sales and many others.

But it was a small candy shop that made this passageway popular and special among the wealthy public. The Lebon Pastanesi was opened by Edouard Lebon, who brought the latest technology from Europe – an oven for baked goods and cakes. Among the confectionery products, the delicious profiteroles stood out.

Visitors to the city, arriving by the Orient Express train, were sure to stop by the famous pastry shop. Among the local celebrities, Pierre Loti, Ahmet Hashim, Namik Kemal, Ziya Pasha visited the café.

They used to say about the pastry shop – “Chez Lebon, tout est bon”, i.e. everything in Lebon is good and tasty.

In 1920, a unique panorama was brought from France to decorate the walls of the pastry shop. It was this that made the establishment something unusual, resembling an art gallery or museum.

Later, in 1940, the pastry shop moved to the other side of the street and another one opened in its place, called Markiz (Markiz Pastanesi). It was also appreciated by the local beau monde and welcomed guests for a long time.

In 1970, the arcade was sold and the patisserie closed. Over the years it was used as a store, but it did not become popular.

Today the pastry shop is empty and the doors of the arcade are closed, and we can only admire its exterior.

Beyoglu has always been a popular neighborhood, both nowadays and in past times. Sultan Abdulhamid II and Sultan Abdulaziz visited the famous Naum Brothers Theater (Naum Tiyatrosu) in Beyoglu, where you could see an Italian opera by Giuseppe Verdi called “Il Trovatore” (“II Trovatore”). The theater was located on the corner of the building that today houses the Flower Passage.

In 1870 there was a great fire in Beyoglu, which destroyed many buildings, including the legendary theater.

One of the famous bankers of the Galata quarter, Khristaki Zografos Efendi, bought the land on which the theater buildings previously stood. In 1876, according to the design of the Italian architect Cleanti Zanno, a new type of building was constructed, with a gallery-like market place at the bottom for 24 benches, and luxury apartments at the top for 18.

Despite the fact that the market part of the passageway was named after the banker – Passage Chrystaki, the building as a whole was called Cite de Pera – “Cite de Pera”. It is this inscription that can still be seen today above the entrance to the building.

In 1908, the building came under the ownership of Sadrazam Said Paşa Paşa and was accordingly renamed Said Paşa Geçidi (“Sait Paşa Geçidi”), i.e. the passage/gallery of Said Paşa. 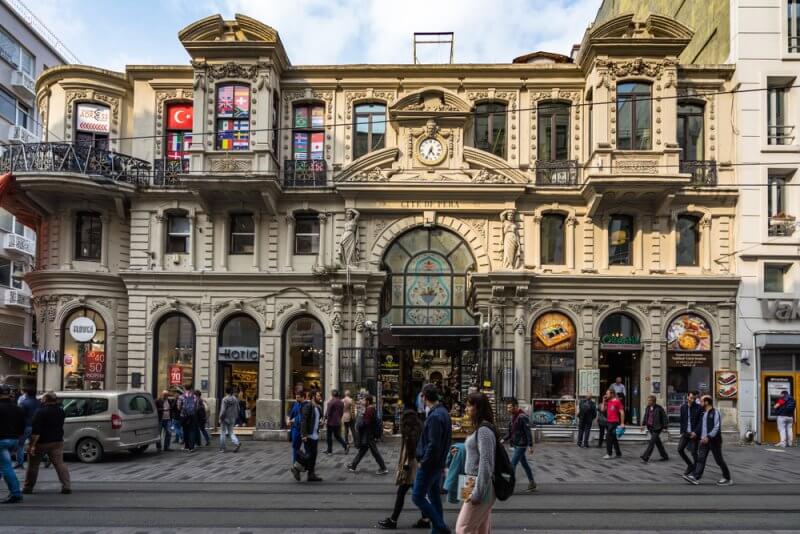 According to the Istanbul Encyclopedia (Reşat Ekrem Koç), the building was built or perhaps simply renovated and remodeled between 1920-22 on the initiative of Said Bey Adapazarli. There is no evidence of who the architect of this particular arcade was.

Earlier, on the site of the arcade there was another building, built in 1831 by the architect Guistiniani Barthelmy, with the Palais De Cristal theater inside.

Later it was used as a cinema where the first audiovisual film in Turkey was shown.

Since 1971 the arcade has been on the list of protected sites in the city.