Kuzguncuk is a beautiful non-tourist neighborhood in Istanbul. A place with bright locations for photo shoots. The neighborhood, which started the history of the Turkish TV series. Colorful old houses with openwork wooden windows and balconies take you back to the 19th century. The atmosphere here is incredibly creative and romantic. Kuzguncuk is located on the Asian side of Istanbul, in the Uskudar neighborhood. We will tell you how to get there and what to see in this article.

Kuzguncuk is a unique neighborhood with an interesting history. For centuries, people of different nationalities and beliefs have lived peacefully in it: Greeks, Jews, Armenians, Turks. In the central street İcadiye Cd not far from each other are synagogues, mosques and Orthodox churches. Here the azan is sounded and the temples ringing, calling for prayer.

For a long time, neighbors have celebrated the holidays of each nation together. It is said that because of this close multinational relationship, Kuzguncuk has acquired its own unique flavor. The neighborhood has formed its own “surzhik“. Locals use words borrowed from other “neighboring” languages. 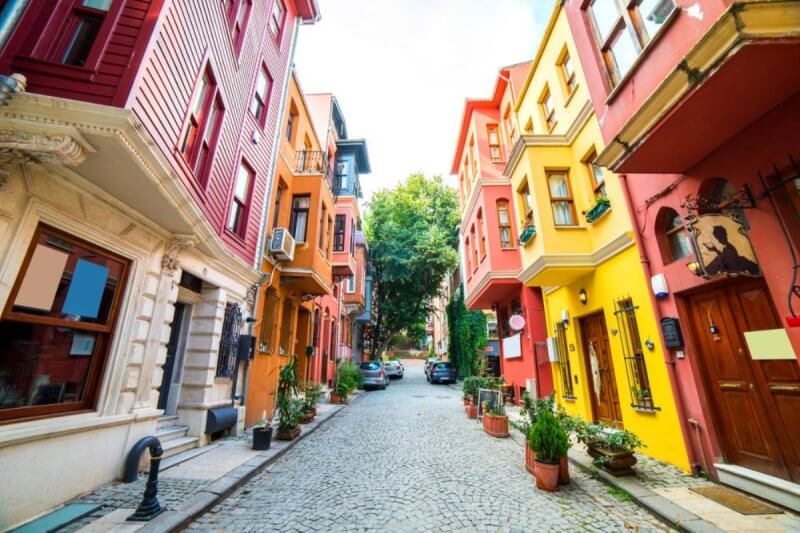 Kuzguncuk retains a nineteenth-century atmosphere. Walking through the streets of such “other” Istanbul is very comfortable. It is soulful, cozy and bright. Only modern cars remind us that we are in the XXI century.

How to get to Kuzguncuk

Getting to this colorful area of Istanbul is easy. The fastest way is to take Bus 15 (with any letter in the number). From Üsküdar pier take 5-7 minutes to Kuzguncuk stop. We took this route.

The Uskudar Pier on the Asian side of Istanbul can be reached as follows:

Marmaray subway, which runs under the Bosphorus Strait. Exit at Marmaray Üsküdar station.
By ship from Eminönü, Beşiktaş or another pier in the city. Kuzguncuk means “little crow”. The settlement in the valley on the shore of the Bosphorus arose more than a thousand years ago. In Byzantine times it was called Hrisokeramos, translated as “Golden Tile”. In 553 Emperor Justinian erected here a church dedicated to the Virgin Mary. Its roof was covered with golden tiles. According to legend, the name “Kuzgunjuk” comes from the name of a respectable man Kuzgun Baba, who settled here in the 15th century, during the reign of Sultan Mehmed II Fatih the Conqueror (1451-1481).

In the historical documents of the 17th century, Kuzguncuk was called a “Jewish village”. It was the first Jewish settlement on the Asian side of Istanbul. Exiles from Spain and Portugal arrived here in the fifteenth century and established a large Jewish community. Kuzguncuk was perceived by the new inhabitants as the last stop before the holy lands. Most Jews settled here permanently, while retaining their unique “Ladino” language and traditions.

Along with the Jewish population, the Greeks have always lived here. From the 18th century a large Armenian community joined them. Kuzguncuk of the 19th century was predominantly a non-Muslim quarter of Istanbul. But 2 mosques were still built in 1860 and in 1952. In the 20th century, most of the Jewish population left for Israel. The combination of architectural traditions of different peoples, mutual respect in a multinational area, cultural exchange over the centuries has created a unique, unlike any other quarter of the city.

Kuzguncuk today is called the “Greenwich Village of Istanbul”. In the 1970s and 80s, intellectuals such as playwrights, architects and poets began to settle the neighborhood. There is a creative atmosphere and a special quiet “country” romance. The block has one main street İcadiye Cd. From it, as branches, branch off the streets. It is worth “getting lost” in them and feel the uniqueness of Kuzguncuk.

On this legendary street was held shooting one of the first Turkish TV series Perihan Abla. It came out on television in 1986-88 and became very popular. Interestingly, the street was even renamed after the movie. Now it is Perihan Abla Street. Local cafes have also updated their names. For example, a restaurant with traditional cuisine Ekmek Teknesi. Translated as “Bread Boat”. That was the name of one of the Turkish TV series in 2002. Several other popular Turkish serials were filmed in the neighborhood. The wooden houses of Kuzguncuk have become the perfect backdrop for films about a bygone era. You rarely see tourists here. And local fans of Turkish serials visit to walk through the locations of their favorite films.

World celebrities have visited the Kuzgunjuk neighborhood. Among them are writer Dan Brown, actress Joanna Lumley. Meryl Streep dined at the family fish restaurant İsmet Baba Restaurant on the waterfront.

This colorful house is one of the “heroes” of the Turkish TV series. The colorful Kuzguncuk has also become a character in the works of many Turkish writers. This is truly a unique place that inspires creativity. Here, beauty is in the details!

The main street of Kuzguncuk is İcadiye Cd. There are 2 Greek Orthodox churches, 2 synagogues, restaurants, stores, galleries, bakery. The attraction of the neighborhood is the local arboretum Kuzguncuk Bostanı. It is a large green area of garden and vegetable garden where vegetables and fruits are grown.

From the main street İcadiye Cd. you should turn into the side streets and walk along them. The highlight of Kuzguncuk are the small stores with original store windows. Cafes, bakeries, restaurants are so good to enjoy the local dishes, pastries, tea. By the way, we always thought that coffee is more popular in Turkey. Another stereotype about this country has been dispelled.

Tea is drunk everywhere in Istanbul, even on vaporettoes. In Turkish, tea sounds the same – “çay”. It is interesting to walk leisurely through the streets of the Kuzguncuk neighborhood. You want to take pictures of almost every house. A walk around Kuzguncuk leaves you with warm, heartfelt feelings. And this is not only because of the beautiful old houses. The neighborhood is quiet and cozy.

We walk up the street. There are more stone houses in this part of the neighborhood. Almost every house is decorated with flowers, bright “handmade” products, toys. 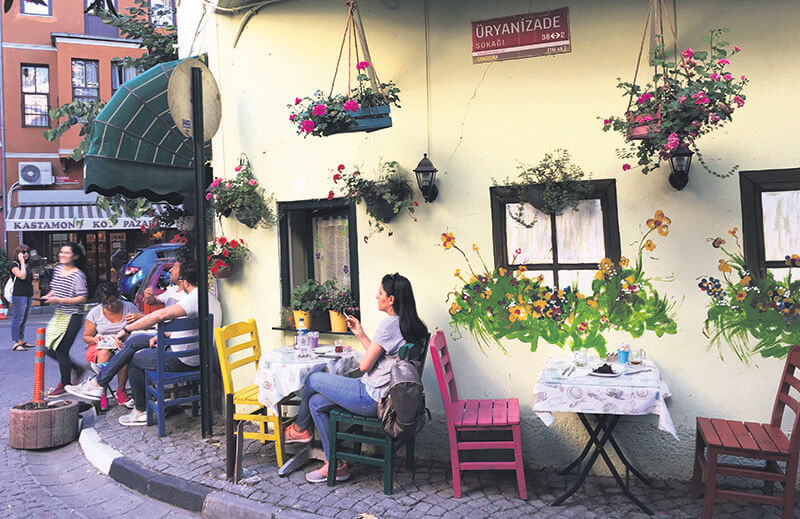 From the promenade you can admire the views of the Bosphorus Bridge and the European side of Istanbul. You can also see a unique small wooden mosque called Üryanizade Ahmet Esat Efendi Camii. (In the photo on the right). It was built in 1860. It bears the name of the sheikh who erected it. The elegant wooden minaret is one of the most beautiful in Turkey.

Kuzguncuk is an incredibly romantic place in Istanbul. It is a special world in a multimillion-dollar metropolis. There is a peaceful and creative atmosphere here. It is worth coming here to see the “other” non-tourist Istanbul. Kuzguncuk is a place you want to come back to.