All about Rumelihisar Fortress in Istanbul

Rumelihisar fortress is not only an architectural but also a historical monument. It played a decisive role in the history of the conquest of Constantinople by the Ottomans. Built at the narrowest point of the Bosporus Strait, the fortress allowed the ships carrying provisions and weapons to the besieged in the city to be blocked.

In 1452, preparing to storm Constantinople, Sultan Mehmed Fatih ordered a fortress to be built on the European shore, in the narrowest part of the Bosporus Strait. On the opposite Asian shore was another fortress, Anadolu Hisar.

Interesting fact! The Ottomans called all the lands in the European part of the empire by the word “Rumeli”, hence the name of the fortress built on the European coast. “Hisar” means “fortress” in Turkish.

The place for the construction of Rumelihisar was not chosen by chance. By throwing a chain between the two fortresses, the Ottomans closed the passage to the Bosporus to enemy ships and blocked access to Constantinople from the sea. It was also a defense against a surprise attack from the water. 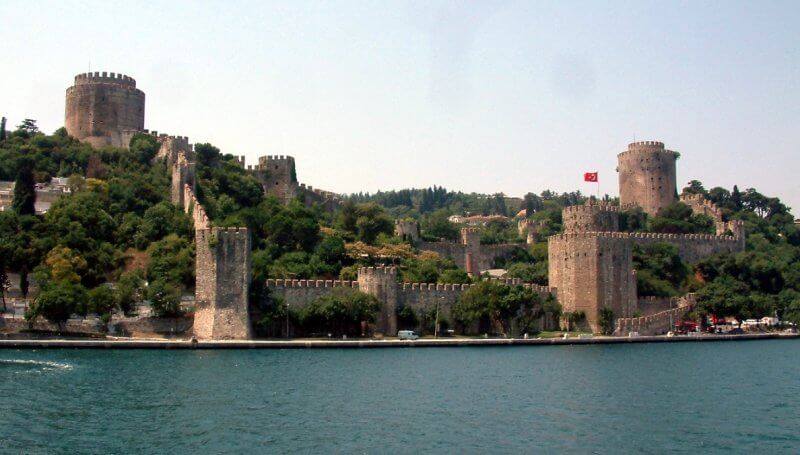 By the way, another advantage of the chosen location for the construction of the fortress is the strong current in this part of the Bosporus Strait. Even if an enemy ship overcame the obstacles set up by the Ottomans, the current carried it closer to the shore where it could be easily hit by artillery shells.

The construction of the fortress was entrusted to three of the sultan’s closest associates, after whom the main towers were later named:

Mehmed Fatih himself supervised the construction of the part of the fortress adjacent to the strait.

The citadel had to be built as quickly as possible. Failure to meet the deadline was punishable by death. For this reason, the work was completed even faster than planned – only 4 months and 16 days later. The fortress was built by 300 craftsmen, over 700 workers, and 200 boatmen who delivered the stones and wood by boat to the building site.

After the fall of Constantinople, the fortress lost its military significance. It was used as a customs checkpoint.

In 1953, the restoration of the ancient citadel began. In 1960 it was included into the museum of Hisar fortress. The fortress includes also fortresses Edikule and Anadolu. There is an artillery museum on the territory of Rumelikhisar. An amphitheater was built, where concerts and theatrical performances are given during the summer period.

At present Rumelihisar fortress is a tourist attraction with an area of 30 thousand square meters. It consists of 3 main towers:

In addition, the fortress includes another 13 small towers. All the buildings are connected by fortress walls. They are quite wide. The soldiers freely moved through the passages.

Note: Visitors are forbidden to climb the fortress walls and the upper tiers of the towers after the fall of the tourist, who tried to take selfies.

The inside of the fortress was accessible through a gate. The southernmost tower also had a secret entrance through which soldiers were delivered weapons and food.

There were barracks for janissaries and a mosque inside. Only ruins of it remained. The building was almost completely destroyed in an earthquake, only the minaret survived. A new mosque, modeled on the destroyed one, was built in 2014. A cistern supplying the troops with drinking water was found under the ruins of the old mosque. 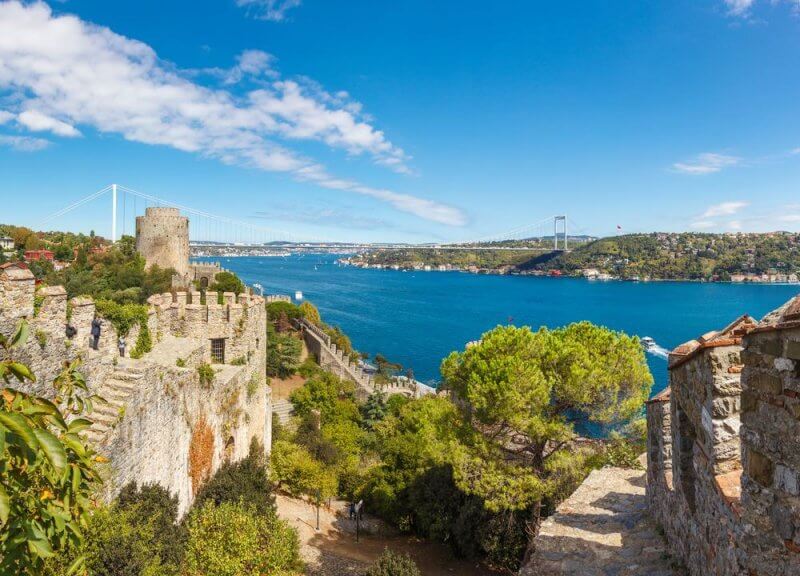 Now there is an artillery museum in Rumelihisar. The place for it was not chosen by chance. During the storming of Constantinople, gunpowder and artillery were used for the first time. Thanks largely to this, the Ottomans were able to take the city. The museum displays different kinds of artillery pieces, cannonballs, a piece of chain which was stretched between Rumelihisar and Anadola Hisar, closing the Bosphorus Strait.

Note! Several exhibits are located on the outer side of the fortress wall.

For the convenience of visitors, the territory of the fortress has been ennobled. Inside, paths were paved, a fountain was built, benches for recreation were installed, and toilets were opened.

What to do and see in the fortress?

Rumelihisar Fortress is located away from the city center and the main attractions of Istanbul, so often tourists bypass its attention. Meanwhile, it is an interesting tourist site. Here you can:

How to get to Rumelihisar Fortress?

Rumelihisar Fortress is located in the Saryer district, on the shore of the Bosphorus Strait, near the Mehmed Fatih Bridge. Despite its remoteness from the most popular tourist routes, it is not difficult to reach it: