We have listed Top Archaeological Museums in Istanbul to see in this blog.

Osman Hamdi was born in 1842 in Istanbul, in a family of the Ottoman high society, since his father was the Grand Vizier. His law studies led him to Paris where he met his future first wife, a French woman named Marie. For the anecdote, he will marry later another Frenchwoman, also named Marie! (he had the practical sense).

If his studies did not predispose him particularly to this double career in art and archaeology, they allow him (that, and a helping hand from dad?) to reach at 26 years old the position of Foreign Affairs Officer in Baghdad, Ottoman province.

It is there that destiny leads him to follow his first excavations and that his passion for archaeology is born. He then took charge of several archaeological sites, including that of Sidon (Lebanon), where the famous Sarcophagus of Alexander was found!

In order to protect all these discoveries from the covetousness of the Western countries, Osman Hamdi Bey obtains the authorization to arrange the first archaeological museum of the Ottoman Empire, in Istanbul. He entrusted the famous Levantine architect Alexandre Vallaury with the construction of a first building, whose neoclassical architectural style evokes the sarcophagus of Alexander. Its construction began in 1881 (completed in 1908). Then in 1883, an annex building was added opposite the first one to house the school of fine arts (his two passions being thus united!). This one is now integrated into the museum and hosts the works of the Ancient East.

Osman Hamdi Bey died at the age of 68 in Istanbul. He left behind him not only a museum, but also magnificent paintings. Because his passion, his talent and his friendships with French painters, allowed him to revolutionize the oriental style. His paintings can be found today in various museums and private collections around the world. One of the most famous is the famous Turtle Tamer (you can see it everywhere in souvenir stores…) This canvas was painted in 1906, 4 years before his death, and broke a record at its last auction in 2004. The Péra Museum in Istanbul bought it for 3.5 million dollars! (Don’t hesitate to go and admire the original in this other museum, dedicated to modern art, in the Beyoglu district).

Presentation of the Istanbul Archaeological Museum

The Istanbul Archaeological Museum is located in the Sultanahmet district, between the Gülhane garden and the Topkapi Palace (T1 Gülhane streetcar station). It was initially in the first courtyard of the Palace. It consists of 3 buildings: It is one of the Top Archaeological Museums in Istanbul

Let’s get down to business! For several years, heavy works were masking the façade of the archaeological museum and forced us to use covered corridors to admire the works, piled up as they were. It must be said that the museum needed it. The old brown carpets and the old-fashioned staging were no longer possible!

In order to follow a logical and chronological order, I start with the first building, which houses the collection of the Ancient East. Here we find the most ancient vestiges: Egyptian, Hittite, Assyrian, Babylonian, etc.

The lions of Babylon

The mythical city of Babylon, capital of the Neo-Babylonian kingdom, was located south of present-day Baghdad, Iraq. It knew its apogee under the reign of Nebuchadnezzar II. Yes, it is him who left his name to the big sizes of champagne bottles! (1 Nebuchadnezzar = 20 normal bottles, that is to say 15L).

So it was around 600 BC that Nebuchadnezzar built the double wall of this grandiose city that is Babylon, also known for its famous Hanging Gardens (classified for a while among the 7 wonders of the ancient world!).

The Gate of Ishtar was one of the 8 monumental gates of the city of Babylon. This one was decorated with enamelled relief ceramics representing various real or imaginary animals. They were the representation of gods of the Babylonian mythology. It is one of the Top Archaeological Museums in Istanbul 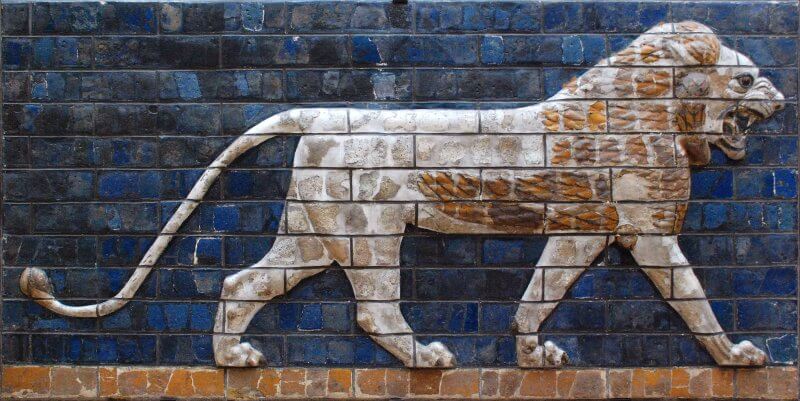 Bulls, dragons, and of course lions…

These ceramic lions were also found on both sides of the processional way, on all its length. This one, started at the door of Ishtar and led to the building which was used for the festivities of the new year. This alley measured 16 meters wide and 300 meters long!

This work is not impressive by its size. Oh no! It is so small and discreet that one could easily miss it. If I selected it, it is because we heard a lot about it, during a recent trip to Egypt!

This small tablet engraved with a text in cuneiform letters is the first peace treaty in history! The one that was signed between Hattusili III, King of the Hittites and the Pharaoh Ramses II. It puts the end to a long discord which lasted nearly a century, between these two powerful kingdoms of the Middle East. The climax of the conflict was the Battle of Qadesh! 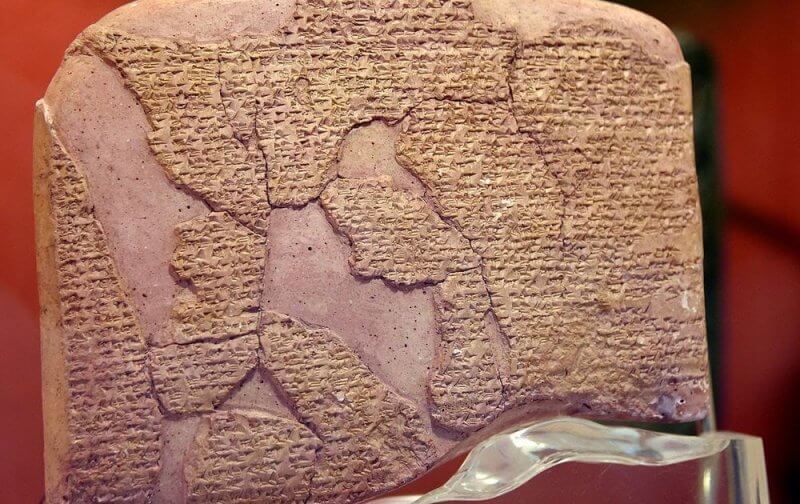 This battle took place 13 centuries before our era, near the city of Qadesh. This city is located on the border of the two kingdoms, on the Hittite side (south of present-day Syria).

At the beginning of the reign of Ramses, he set out to reconquer this strategic territory, which had once belonged to them. His father Seti I had already broken his teeth there! Never mind, he raises his army and sets off.

At the head of 20,000 Egyptian soldiers, Ramses finally found himself ambushed, because the Hittite king Muwattali II was already waiting for him. By their strategy and the effect of surprise, the Hittites inflict heavy losses to the Egyptians from the first day of the battle. The life of Ramses is threatened. The victory which was acquired to the Hittites, escapes them however! The official version reported by Ramses, tells how the Pharaoh, with the help of the gods, has almost alone overthrown the Hittite army. It is this episode which shaped the legend of the great Ramses II.

What does this treaty of Qadesh tell us?

In the museum of antiquities of the archaeological museum of Istanbul

Let’s climb the few steps of the stoop… to discover other works in our Top Archaeological Museums in Istanbul.

It’s time to talk about the royal necropolis of Sidon! This city currently located on the coast of Lebanon (Saida) is the ancient capital of the Phoenicians. And like any great city, it had to have a necropolis to accommodate the remains of its illustrious rulers. It was in 1887 that the necropolis of Sidon was discovered by chance and that the excavations revealed incredible tombs, today presented in the archaeological museum of Istanbul.

Among all these tombs, the one that contained – and still contains – the mummy of Tabnit! The latter was a king of Sidon, who reigned during the 5th century BC. The story of the mummy of King Tabnit would deserve to be dedicated to him in an Indiana Jones movie, considering the following anecdotes! 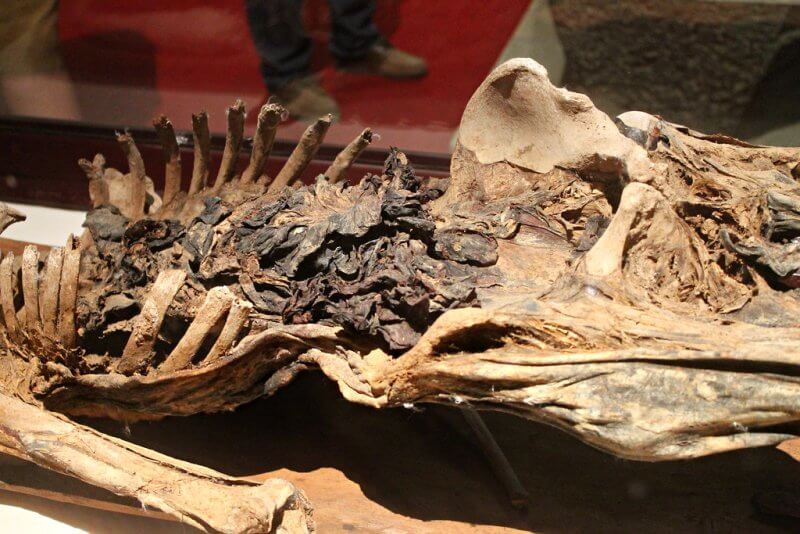 The incredible anecdote about the mummy of Tabnit :

Reuse of an Egyptian sarcophagus

Doesn’t the magnificent sarcophagus that you can contemplate at the Istanbul Archaeological Museum remind you of an Egyptian sarcophagus? Normal, since it was initially made for a general of the Egyptian army, named Pen Ptah. What happened to this first tenant? We do not know. However, one thing is certain, its current occupant is none other than the Phoenician king of Sidon, Tabnit! It is one of the Top Archaeological Museums in Istanbul

The inscription that was added in Phoenician language tells this: “I, Tabnit, priest of Asparta, king of Sidon, am lying in this sarcophagus?

And here is the great star of the archaeological museum of Istanbul … Ladies, gentlemen, before your eyes amazed, here is the Sarcophagus of Alexander!

It too was found in the extraordinary Royal Necropolis of Sidon. When it was discovered, archaeologists even thought that it could be the tomb of Alexander the Great himself. Because, not only is it majestic, but also the scenes that are carved there represent the great conqueror. However, it is not Alexander but only the last king of Sidon, Abdalomynos.

Abdalomynos reigned at the end of the 4th century BC. He is not a direct descendant of his predecessor. He was appointed king by General Hephaeston, whom Alexander the Great had charged with finding a ruler for Phoenicia. It is one of the Top Archaeological Museums in Istanbul

What can be seen on the Sarcophagus of Alexander?

This magnificent white marble sarcophagus is engraved with high reliefs, whose paintings are still visible in some places. Here is what each side of the sarcophagus tells us:

The scene of the Battle of Issos:

The first large face is a praise to the King of Macedonia, the great conqueror Alexander and his victory over the Persian army of Darius III.

The Battle of Issos takes place in 333 BC, in the south-east of the current Turkey (towards Antakya). Darius undergoes a terrible defeat and must take its legs to its blow. While one loses his honor, the other opens a royal way towards the conquest of Phoenicia and Egypt…

On the left, we recognize Alexander on his famous horse Bucéphale, like Zorro and Tornado! A lion skin covers Alexander until he forms a helmet with his mouth. Higher up on the lid of the sarcophagus, we find a magnificent sculpted lion. The Greek soldier on his mount in the center could be General Hephaestion. As for the one on the right, General Pendiccas or Kratéros. What is certain is that those who are being crushed are Persian soldiers.

The scene of the hunt:

On the other large side, peace and harmony have returned to Alexander’s empire. Greeks and Persians can now go hunting together, like good friends! As a result, it is now the deer that are being speared…

The figure in the center is probably king Abdolamydos (after all it is his sarcophagus).