See Istanbul from 55 floors, fly over the city in a virtual helicopter in a fairy tale, get to the center of attractions – it’s all at the Sapphire skyscraper. At 236 meters is the highest observation deck in Istanbul. From here you can see the whole of Istanbul like in the palm of your hand. The view is amazing! The Sapphire is in the city’s Levent neighborhood, which is called “Istanbul’s Manhattan”. The grandiose skyscrapers of the neighborhood are impressive. In this article, we will tell you how to get to Sapphire in Istanbul, the opening hours of the observation deck, and ticket prices. 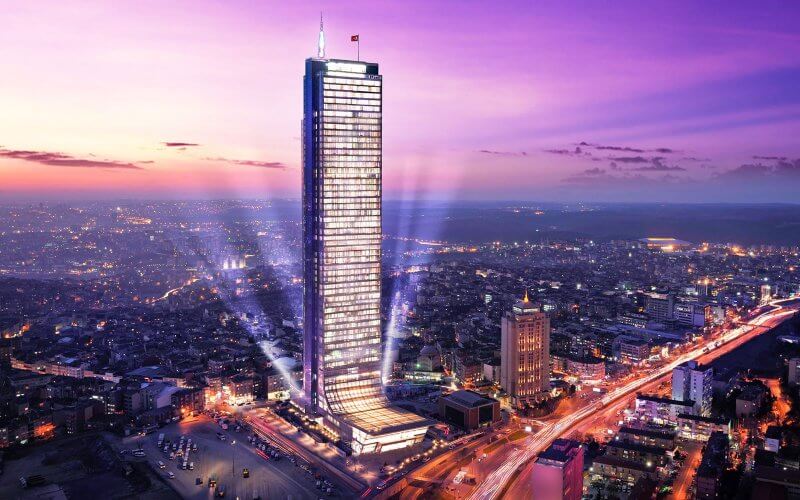 Levent is a prestigious business district of Istanbul. It is located on the European part of the city, in the municipality of Besiktas. It has the largest concentration of skyscrapers in the city. Levent is the “other”, modern Istanbul. The area is home to major banks, corporate offices, expensive hotels, luxury housing, shopping centers, galleries, and the embassies of several countries. For example, Switzerland, Uzbekistan, Georgia, and the Kingdom of Saudi Arabia.

“Levent” has been the name of a soldier in the Ottoman navy since the 16th century. The word is of Italian origin. “Levantine” – “a man from the Eastern Mediterranean” – was spoken to Turkish sailors by the Venetians and Genoese. Subsequently, the Turks borrowed the name. Ottoman sailors were known as strong, brave, desperate warriors. Even today in Turkey, brave, athletic, handsome men are called “levent.

In 1780 this area was given to the possession of the Ottoman navy. At the beginning of the XIX century there were built barracks for sailors and a large military complex. Nearby, on the shore of the Bosphorus the docks for the repair of ships of the Turkish fleet were located. Hence the name of the district Levent. The construction of villas and apartment buildings started here in 1947. And in the 1990s, Levent became a popular place to build skyscrapers owned by major Turkish banks and corporations. The new high-rises still continue to “grow”. From the opposite shore of the Bosphorus the panorama of skyscrapers of the Levent district is impressive. 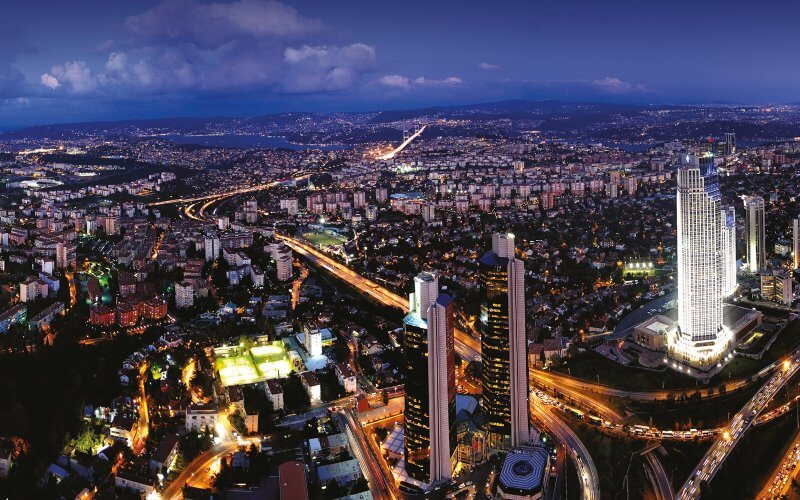 The Sapphire skyscraper is one of the tallest buildings in Istanbul and Turkey, the first ecological skyscraper in the country. The Sapphire is 261 meters tall, including the spire. There are 54 floors above the city and another 10 located underground. It is interesting that during the construction of Sapphire the deepest hole in Turkey was dug for the foundation. Its depth was 42.5 m, which is approximately equal to the height of a 14-storey house. Sapphire houses luxury residences, luxury apartments with private gardens, restaurants, gyms, swimming pools, Sapphire Çarşı shopping center.

What is especially interesting about Sapphire? On the 55th floor, on the roof of the Sapphire skyscraper, there is an observation deck with incredible views of Istanbul. From a height of 236 meters you can see the city as if in the palm of your hand, all the way to the horizon, all 360 degrees.

A view of the Bosphorus and the Bosphorus Bridge. In the distance is the Asian, Anatolian part of Istanbul. The famous Istanbul traffic jams are clearly visible from above. Interestingly, from the height of the Sapphire the other skyscrapers of the Levent district seem small. The Sea of Marmara is blue in the distance. The Prince’s Islands are barely visible on the horizon.

From the Sapphire observation deck you can see just how grandiose Istanbul is. From the European edge of the metropolis to the Asian edge is more than 100 km. On the hills on both sides of the Bosphorus and the Golden Horn, on the coast of the Sea of Marmara almost 15 million people live. How much can you see – all this is Istanbul!

It is worth climbing the Sapphire when the weather is good. The observation deck on the roof is partially open and protected by solid glass. When the wind is strong, you can admire the city indoors. There is a restaurant/café “Vista” with a beautiful view of Istanbul, a souvenir store, a small 4D helicopter flight simulator Sky Ride.

How to get to Sapphire

1.The fastest option is the subway. There is a subway station 4.Levent on the 3rd underground floor of the Sapphire. This is the green M2 branch of the Istanbul Metro Yenikapi – Haciosman. It’s convenient – from the subway station you go straight up to Sapphire. The end station of M2 – Yenikapi – is on the other side of the Golden Horn.

To get from Sultanahmet to Sapphire is as follows:

Take the T1 tram from the Sultanahmet stop to the Laleli-Üniversite stop. Here you change to the subway – the station of the green M2 line is called Vezneciler. The exit is at station 4.Levent. The trip takes 40-50 minutes.

With two transfers. First, you take the T1 streetcar from Sultanahmet station to Kabataş station. Change to the F1 underground funicular to Taksim Square. From the Taksim area, take the M2 direct metro line. From Taksim subway station go to 4.Levent station. The journey takes only 50-60 min. But in this route you can additionally walk the tourist street Istiklal.