Prince Islands or Otherwise Known as “Adalar in Istanbul”

The Prince Islands in Istanbul (Adalar) is a picturesque archipelago located in the Sea of Marmara is one of the most popular places for an unforgettable beach holiday and educational excursions. The islands are located near the capital and do not distract with the hustle and bustle of the big city. Each of them has its own special flavor.

Sunny and warm weather is the best time to visit these beautiful scenic spots. In addition, a ferry ride in the warm season is enjoyable. 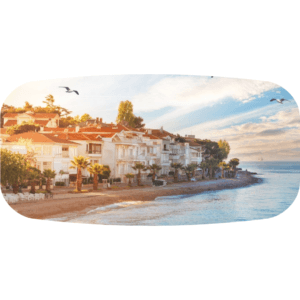 Over their long history, the islands have had various names: Divided, Public, Red, Holy, Spirit Islands.
But the most famous is the Princes ‘ Islands. The origin of the name goes back to the centuries of the Ottoman and Byzantine Empires. At that time, unwanted princes or aristocratic persons were banished to the islands, who could not leave their places of imprisonment until the end of their lives.

In the 19th century, the islands’ territory was inhabited by various faiths and nationalities: Jews, Greeks, Armenians, and Turks.

A ferry service has been established between Istanbul and the Prince Islands since 1846.

The archipelago consists of 9 islands. Only 4 of them receive guests and are inhabited by residents; these are Heybeliada, Buyukada, Kinaliada, Burgazada. Sivriada and Tavsanadasi are completely uninhabited, while Kasikadasi and Yassiada are private territories, and Sedefadasi is almost half inaccessible to visitors.

There are mainly ferry connections between the islands and Istanbul. Water transport runs according to the schedule. Only during bad weather, delays or cancellations are possible.

Many tourists are interested in the question of how to get from Istanbul to the islands. The capital is connected to remote areas only by waterways, so the choice is small.

The best way to get to the archipelago is by ferry. This is public transport, and a trip on it will be inexpensive; about 5 liras.

Ferries depart from the docks:

You can only get to the four main islands. The journey time is about 1.5 hours. It is better to leave in the morning. Ferries run every 30 to 60 minutes.

The largest island, Buyukada, has the largest number of beaches. This includes 8 equipped beaches, among which there are family beaches. On these beaches, it is convenient to swim with children. Some of the beaches are small in area; many of them are rocky.

Most beaches are chargeable. The price includes a sun lounger and a table next to it, an umbrella, a toilet and shower, a changing area. On paid beaches, there is always an opportunity to have a snack in a cafe or restaurant.

Entrance to the territory of the beaches is paid. The price may include the rental of a sun lounger, umbrella, use of toilet areas and changing rooms, and mini-golf. On some beaches, children under 7 or 12 are free of charge.

The beaches on the island of Burgazada are not very well equipped and are not as well equipped as Buyukada. But they have changing rooms, showers, and deck chairs.
On Kinaliada Island, you can visit Kumluk Beach. There is everything you need for a beach holiday: umbrellas, toilets, umbrellas, showers. 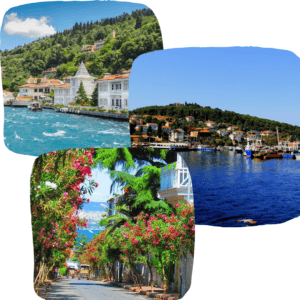 You can explore the sights and enjoy the views by visiting:

You may be interested in the Prince Islands Museum, which opened in 2010. The exhibition presents documents, photos, things, and videos that tell about the history of the archipelago islands. 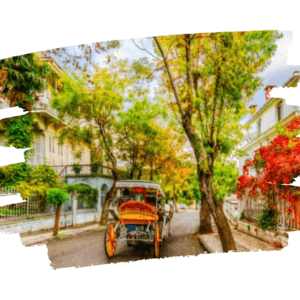 The island is not replete with historical attractions and highly developed infrastructure. Lovers of peace, silence, and romance tend to come here. But the church of Aya-Yani, which has a dungeon under the ground, the house-museum of the writer S. Abasiyanik, and the holy spring are worthy of attention. 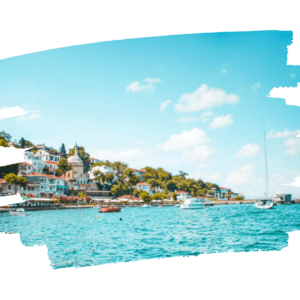 Heybeliada is the second-largest and greenest of the islands in the archipelago. Attractions can be considered as: 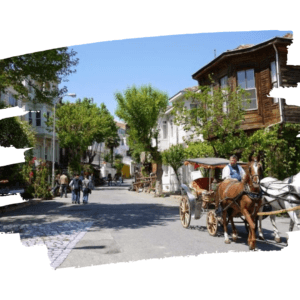 Kinaliada got its name because of the reddish color of the stones and soil. Tourists are not frequent visitors on its territory, but connoisseurs of silence, privacy, and sea baths will be quite satisfied. It is worth visiting the Monastery of Christ. 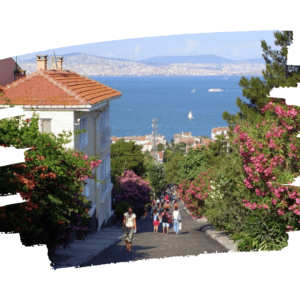 Local restaurants will become an event and a joy for seafood lovers. Gourmets will appreciate the fish menu from the Sea of Marmara. In the special aquariums on the territory of the restaurant, you can choose and order fish that will be prepared for lunch.

For those who prefer strong drinks, it is worth trying “raki.” For example, it is worth noting places: Konak Lokantasi or Ali baba on the island of Buyukada with traditional cuisine.

The climate and temperature in the archipelago are similar to the weather conditions in Istanbul. But a nice difference is the refreshing breeze from the Sea of Marmara. It makes life on the islands more comfortable on hot summer days. Winter is rainy and warm. The beginning of the tourist season begins in May but subsides by October. The maximum water temperature reaches August; 23.6 degrees. In February, it decreases to the level of 7 degrees. The swimming season is in June.

Holidays in the archipelago will delight you with pleasant air and sea baths, educational excursions, a variety of cuisine, and nature.

Istanbul Nightlife: Bars And Clubs In Istanbul To Visit

Istanbul Cost Of Living And Travel