There is an event that comes back every year and that we always welcome with pleasure… it is the Istanbul Tulip Festival! An explosion of colors and scents when the city is covered with its carpet of tulips, the whole month of April.

In this article, we tell you more about this emblematic flower of Istanbul, its symbolism, and especially about the most beautiful places where you can admire these clumps … for the Istanbul Tulip Festival!

The origin of the tulip

What is the country of the tulip? Don’t answer Holland!

This pretty wild flower originally grew in the steppes of Central Asia (just like the early Turks by the way!). It thrived at the foot of the Himalayas, as well as in present-day Iran (ex-Persia), Afghanistan, Kazakhstan and all the other -stan … until it reached Anatolia, in the heart of present-day Turkey.

The tulip – lale in Turkish – could have continued its quiet existence, far from the spotlight, but Sultan Soliman the Magnificent fell under its spell. The monarch who, during the first half of the 16th century reigned over an Ottoman empire at its peak, took the habit of adorning his turban with a tulip.

When Europe discovered this flower, the name “tulipan” was first given to it because of its resemblance with the turban of the sultan (not false…). But finally “tulip” sounded better, so we changed… 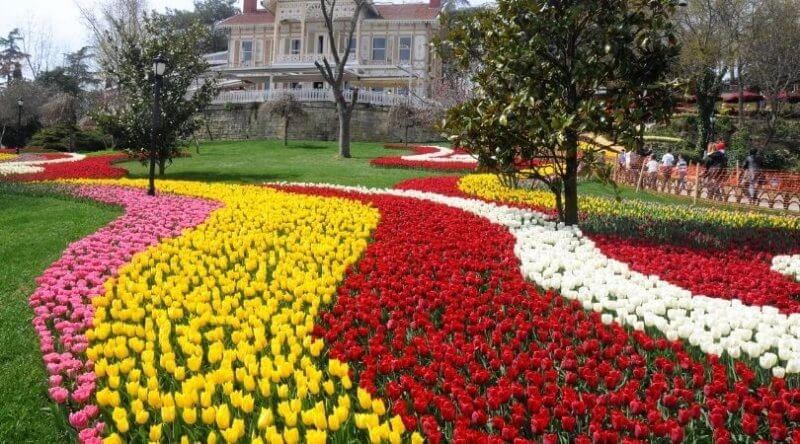 The son and successor of Soliman, Selim II, is also passionate about the tulip to the point of planting some 300,000 tulip bulbs in the 4th courtyard of the Topkapi Palace, which is now called the Tulip Garden (oh my!). Innumerable varieties were created there by crossing. Some of the Sultans themselves indulged in the pleasure of horticulture!

The precious tulip is then reserved for the Sultan and the Ottoman high dignitaries and its trade is strictly forbidden. But what is forbidden is all the more tempting… and tulip bulbs will eventually arrive in Europe.

First in the suitcase of an Austrian diplomat, Ogier Ghiselin de Busbecq in 1562. He offered some bulbs to Charles de l’Ecluse, a botanist from Arras, then in charge of the Austrian Emperor’s garden in Vienna. He was later recruited as a professor of Botany at the University of Leiden in the Netherlands. This is how the tulip arrived in Holland and did not take long to cause trouble…

In the 17th century, the rich Dutch literally snatched it up and an era of delirious speculation around Tulip bulbs began. A real “Tulip Mania” took place! A single tulip bulb could be exchanged for the equivalent of 15 months of income for a Dutch farmer! Or for a beautiful house in Amsterdam! The big bandits of the time attacked the gardens of the University to steal the precious bulbs…

This financial madness around the tulip is considered the first speculative bubble in history (the bulb bubble…). It ended with a stock market crash in 1637: At the height of the tulip craze, the market collapsed and destabilized the entire Dutch economy. Fortunately, afterwards, the tulip became affordable for most people and was finally democratized.

The tulip is therefore not strictly speaking native to Turkey, but its cultivation started in the former Ottoman Empire, before becoming in the 16th century the darling of the European courts and in particular the Netherlands.

The tulip in Turkish culture

For those who live in Istanbul, there is no doubt that today the tulip is the symbol of the city and of all Turkey! Since the 16th century, the tulip is planted, but also painted, sculpted, woven, embroidered…

Have fun looking for it, for example in : 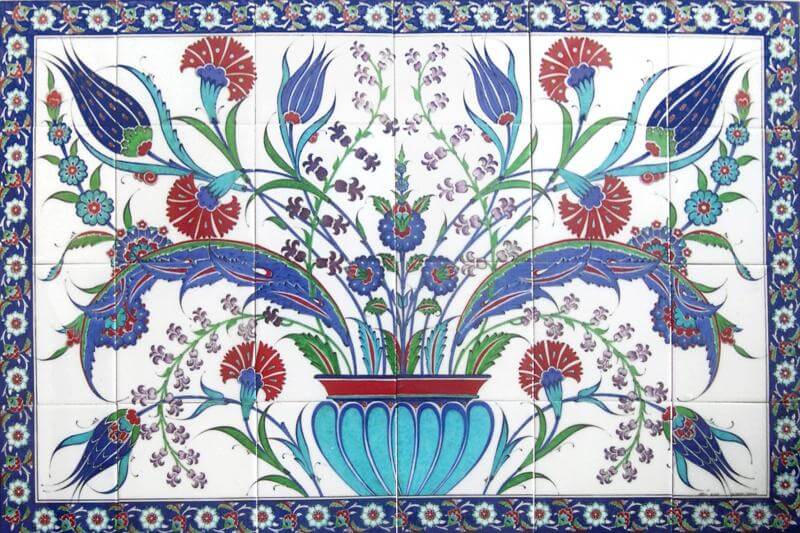 In the Muslim religion the tulip is also very strong in symbolism since it includes the letters of the word Allah. Moreover, for the Sufis, the shape of its corolla evokes the silhouette of the whirling dervishes during their sema ceremony. Enjoy the Istanbul Tulip Festival

Where to see the most beautiful clumps of the Istanbul Tulip Festival?

In April 2019, Istanbul organized its 14th Tulip Festival! Every year since 2005, from the beginning to the end of April, exhibitions, concerts, sports tournaments, bulb sales, and photo contests take place. But above all, there are several MILLIONS of tulips that bloom in all the parks, squares and roadsides of Istanbul!

Under the gaze of Atatürk, whose statue is enthroned at the entrance of Taksim Square, an ephemeral garden of tulips is spread out. These compositions of tulips are installed in trays placed in April for the occasion.

The Taksim Cumhuriyet Art Gallery, allows you to visit the tulip exhibition for free. You can see the objects and panels that trace the importance of the tulip in Ottoman culture.

Gülhane Park – which in Turkish means rose garden – is located below the Topkapı Palace in the Eminönü district. It used to be part of the Sultan’s palace, before it was turned into a public garden. Inside this very nice park, there are fountains, an artificial pond, playgrounds for children, a statue of Atatürk.

We also take the opportunity to digress on the Topkapi Palace, which in this period of Festival is also invaded by tulips. And especially in the garden of the 4th court, called Tulip Garden! Enjoy the Istanbul Tulip Festival in Gulhane Park 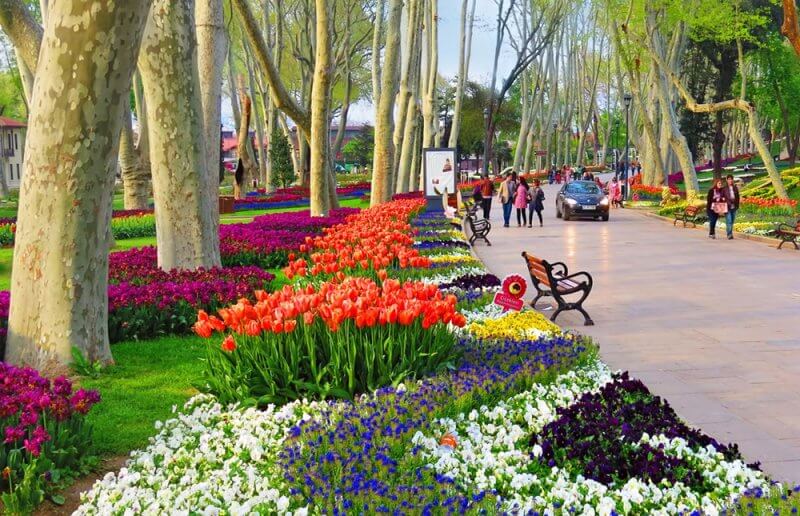 Yildiz Park – which in Turkish means Star – is one of the most pleasant parks in Istanbul, in the district of Beşiktaş, on the shore of the Bosphorus. Covering an area of about 5km², it was laid out at the end of the 19th century by Sultan Abdulamid II, who had his new residence built there.

Today, the gardens are open to the public, who go there mostly on weekends to picnic. During the week, it’s much quieter and deserted, and you can easily see squirrels doing the crazy!

There are restaurants, installed in the old imperial kiosks, artificial lakes, games for children, and of course beautiful flower beds!

The park is all on a slope, so with nice views on the Bosphorus. But it is better to have a good physical condition if you access it from the bottom. Otherwise there is also an access from the top!

The Emirgan park is the most northern one, on Istiniye, towards the Black Sea, so it is not the easiest to reach if you come from the center. However, during the Tulip Festival in Istanbul, the number of boats that serve the pier increases! So you can opt for the boat or the bus, going along the Bosphorus.

Even more beautiful than Yildiz Park, it is the park for newlyweds who come there by the dozens every day for photo shoots!

Emirgan Park is also the place where Tulip Festival in Istanbul takes place, so it’s the place to be for all people from Istanbul! You will see the most beautiful compositions and the most beautiful massifs of Tulips of Istanbul. Just look at the numbers: 2.8 million tulips of 190 different varieties, on 5km²!