Churches to visit in Istanbul

Istanbul churches, which has hosted millions of people for centuries, has various beauties both in terms of architecture and religion.

In terms of the values they represent, many beautiful and magnificent architectural structures ensure that the cultures that lived in their time still remain alive.

There are also many magnificent churches in this city where people from different religions lived.

On the other hand, have discussed the most popular churches of Istanbul for you, our dear readers, in today’s blog post.

Christianity has been living in Istanbul since the 4th century. Istanbul churches is an extremely important city for local and foreign Christians.

Because Istanbul has hosted various Christian denominations for centuries. For this reason, these churches still continue their activities in both touristic and religious sense.

The Hagia Sophia, also known as the eighth wonder of the world, is among the churches that must be visited in Istanbul. 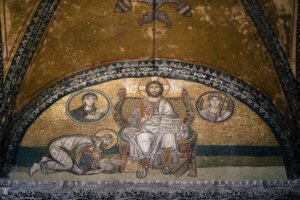 The eight wonder of the world, which was started to be built as a church in 325, was rebuilt in 537. After the conquest of Istanbul in 1453, it was converted into a mosque by Fatih Sultan Mehmet.

Continuing to serve as a museum since 1935, Hagia Sophia was started to be used as a mosque again after the decision taken in 2020.

The church, located in the Fatih district of Istanbul, is known as an important turning point in the history of architecture.

This mosque, which is architecturally divided into a lower floor and an upper floor, has a very large and magnificent structure.

For this reason, it has been a frequent destination for millions of  tourists every year. The mosaics in its content still preserve their originality today.

On its walls; Iznik tiles contain ‘runic’ inscriptions thought to be from the Vikings, Patriarch mosaics and various visual beauties of the period.

Entrance to the church is between 08:30 and 16:00 in the morning. Strict precautions are taken by the security at the entrances.

In addition, a liturgy is held for members of the Christian religion on Sundays.

There are important religious items inside the church. It has been an important structure throughout history, socially, politically and religiously.

‘The whipping column’, which is thought to be found in 2 or 3 churches in the world, is located in this church. In the church where the bones of St. Gregory the Theologian are found, there are also the coffins of the saints.

In its courtyard, there is the Patriarchate building, the library and Aya Haralambis Holy Spring.

It was the seat of the Ecumenical Patriarchate of Constantinople, considered the spiritual leader of 300 million Orthodox Christians worldwide.

This church, located in Istanbul Taksim, is a church on the left before entering Istiklal Street.

The Greek Orthodox Hagia Triada Church, dating back to the 1880s, is one of the most magnificent churches in Istanbul.

This church, which has a magnificent dome, also has two bell towers.

Also located in Istanbul Taksim, the exact location of this church is Istiklal Street.

The Catholic church of St. Antuan stands out as one of the most magnificent churches.

At the same time, services are still held on Sundays for Catholic Christians.

This church, which was started to be built in 1906, is also the largest church in Istanbul.

Its facade is covered with red stones.

The walls of the church are covered with mosaics up to a certain height.

Located in the Karaköy district of Istanbul, St. Pierre church is located on the same street as the Galata Tower.

This church, which was opened in 1604; It was built in the form of altars and basilica on four sides.

The dome in the church is in sky blue color and surrounded by golden stars.

The back wall of the church was built adjacent to some of the old Genoese walls of Galata.

The outside of the church is covered with inscriptions.

Located close to the Fener district, this church is actually a Bulgarian Church (Hagia Stefanos).

Located on the Golden Horn coast, this church has an extremely magnificent structure.

The iron molds used in its construction were brought by Vienna by ships in 1871.

This church, also located in the Karaköy district of Istanbul, is known as the oldest Armenian church.

The bell and elegant dome of this church, which was built in 1431, has an architectural structure worth seeing.

This church, dating back to the 6th century, is located in the 1st courtyard of Istanbul Topkapi Palace.

Known as the oldest Byzantine church in Istanbul, St. Eirene was restored in accordance with its architecture after the severe earthquakes it experienced.

It is an extremely important church for Orthodox Christians.

Located in the Zeytinburnu district of Istanbul, this monastery is a Greek Orthodox place of worship.

This structure, which was built by the Eastern Roman Emperor in 559, was damaged during the Ottoman Empire.

The reason why its name is called ‘Balikli’ is due to the fact that it is located in Balıklı district of Zeytinburnu district.

In addition to all these churches, Istanbul has been an extremely important location for civilizations and different religions since the earliest days of history.

For this reason, many churches, which we cannot count for you, are located in different parts of the city.

If you also like to see historical buildings and different architectures, we recommend that you take time to visit the churches in Istanbul.

You may be interest: Basilica Cistern: A Unique Attraction In Istanbul