Top Things To Do in Winter in Istanbul

Winter in Istanbul – From mid-December to mid-March, Istanbul experiences winter with temperatures rarely exceeding 10 degrees Celsius. While there may be sunny days, the sky is often gray. However, life goes on and the city adjusts to the colder weather. Central districts such as Nişantaşı and Beyoğlu tend to be more crowded, while the shores of the Bosphorus are quieter.

This can be a pleasant time to visit Istanbul as there are fewer tourists, allowing you to peacefully enjoy the city’s monuments and museums. Istanbul also has a unique and mysterious charm in the winter, and it is not uncommon for the city to experience a week of snowfall, which can be delightful for photographers.

Here is the list of activities to do especially in winter:

The fishing season in Istanbul resumes at the end of September, and this is the time when you can find the greatest variety and best quality of fish. Some seasonal fish to try include lüfer, a Bosphorus fish, and kalkan (turbot), which is delicious despite its unappealing appearance. To stay warm during the winter, consider pairing your meal with some rakı, a national alcohol made from aniseed that is similar to pastis. Rakı is a popular drink in fish restaurants and is often enjoyed during “rakı sofrası”, dinners where people drink and debate while enjoying rakı.

The founder of the Turkish Republic, Mustafa Kemal Atatürk, was known to enjoy rakı and often had “rakı sofrası” with his advisors and relatives. 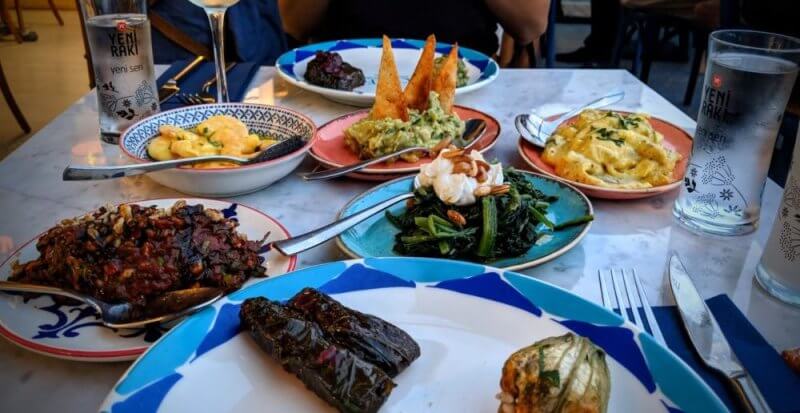 Salep and çay are two popular hot drinks in Turkey that have a long history dating back to the Ottoman Empire. Salep is a hot drink made from salep powder (made from the root of an orchid) and hot milk, often sprinkled with cinnamon. During the Ottoman Empire, it was widely consumed throughout the region and even reached as far as England and Germany, where it was an affordable alternative to coffee. Today, salep can be found in coffee shops or from street vendors in Turkey. Çay, or Turkish tea, is another popular hot drink in Turkey that is enjoyed by many.

Boza is a fermented drink made from various cereals (such as millet, wheat, or bulgur), sugar, yogurt ferments, and sometimes vanilla. It is typically consumed between September 15th and May 15th, especially during the winter months. The fermentation process takes about five days. Boza can be found from street vendors in Istanbul, who are often recognized by their calls of “Boza Bozaaaa!” One of the most famous shops selling boza is the Vefa Bozacısı shop located in the Vefa district of Istanbul.

This shop has been in business for over 130 years and is known for producing some of the best boza in Turkey. The shop’s atmosphere and setting will transport you back in time. GO TO THE HAMMAM

After a cold morning exploring the city, there’s nothing better than warming up in a Turkish bath and relaxing with the skilled hands of a masseur.

-The Kılıç Ali Paşa Hamamı is a popular choice, located in the Tophane district and dating back to 1590. It has recently been renovated and offers impeccable service. The basic package (which includes the hammam, scrub, and massage) costs 570 TL. The only downside is that the hours for men and women are not the same.

-The Çagaloğlu Hamamı, built in 1741, is a well-known Turkish bath with a basic package (including the hammam, scrub, and massage) costing 50 €.

-The Süleymaniye Hamamı, located next to the Süleymaniye Mosque and built in 1557 by architect Sinan, offers the convenience of mixed hours. The traditional package (including the hammam, scrub, and massage) costs 50 €.

If you find yourself needing to escape the rain or extreme cold, one option is to visit one of Istanbul’s large shopping centers, many of which have state-of-the-art cinemas with Imax 3D screens. Most foreign films in Istanbul are shown in their original language with Turkish subtitles. And while there, enjoy a drink in nice a neighborhood…

If you’re in the Nişantaşı district, consider stopping for a coffee or cocktail on Atiye Sokak or Akkavak Teşvikiye Caddesi. After 6-7pm, you can also check out the neighborhood’s many bars such as Joker No 5, a popular bar with a wide selection of spirits, Kozmonot, a hip spot to meet up with friends, or Socrates, a bar affiliated with a football magazine that also serves great food and homemade cocktails. These places are often packed every night and are great for socializing. For a more upscale experience, you can visit Spago, the gourmet restaurant of chef Wolfgang Puck at the St Regis hotel.

If the weather isn’t suitable for outdoor activities after visiting Istanbul’s classical monuments, consider visiting one of the city’s many museums.

There’s something for everyone, and we recommend checking out the Museum of Industry (Koç Müzesi) where you can see airplanes, trains, cars, and even a submarine, the energy museum (Santral Istanbul) which has sections dedicated to contemporary art and energy, and the Military Museum, which has a large collection of military artifacts from ancient times to the present.

Istanbul’s aquarium, which opened in 2011 and covers over 6,000 square meters, is one of the largest in the world. It is home to more than 10,000 sea creatures including giant rays and tiger sharks.

This interactive museum uses advanced technology and follows a geographical itinerary, taking visitors through 16 different environments ranging from the Black Sea to the Pacific via a water tunnel that is 80 meters long.

In addition to the aquarium exhibits, visitors can participate in activities such as feeding the fish and watching 5D projections. While it is a bit out of the way from the city center, it is well worth the visit and will keep you occupied for a large part of the day. There are also several restaurants on site, making it a great choice for families with children.

In Istanbul, it is common to see people in small cafes playing tavla (backgammon), which is a popular national sport in Turkey. If you are interested in learning how to play, don’t hesitate to ask the servers for help. They will be happy to explain the layout of the pieces and the basic rules. In these types of establishments, you can also ask to play cards (kart).

If you want to play a wider variety of games, visit the Ağa Cafe Bilardo Salonu in the Cihangir district. In addition to traditional Turkish games, it has pool tables and even a ping-pong room. The Cihangir district is known as a hub for hipsters in Istanbul and is a great place to explore.