6 Things To Do in Karakoy Neighborhood

The sights of Karaköy have been attracting more and more interest from visitors in recent years. Karaköy, part of the Galata district originally settled by the Genoese in the 12th century, has been home to various cultures over the centuries, including Jews, Genoese, Greeks, Romans, French, Venetians and Ottomans.

This colorful historical neighborhood on the coast is indeed worthy of attention. And especially after the opening of Istanbul’s new location, Galataport, it will be hard to pass by without checking out Karakay with its many establishments. In this article we would like to tell you what Karaköy attractions you can visit.

1. Church of the Virgin Mary of the Turkish Orthodox Patriarchate

The sights of Karaköy are not immediately apparent in the color of the streets, but if you have ever been here, you have definitely passed by the Church of the Virgin Mary. The church was founded on September 15, 1922 in Kayseri as the Autocephalous Orthodox Patriarchate of Anatolia with the support of the Turkish government who were trying to create a national Orthodox church not affiliated with Greek Orthodoxy and to break the ties of the Greeks living in Turkey with Greece by making them patriots of the young Turkish Republic.

The Turkish Orthodox Church is officially registered in Turkey as a religious entity, although it is not recognized as canonical by the other Local Orthodox Churches.

If you are interested in religious buildings of Karaköy, I advise you to visit the Russian Orthodox Church of St. Panteleimon, the Church of St. Peter and St. Paul, the Armenian Church, on the territory of Karaköy there are still two synagogues. 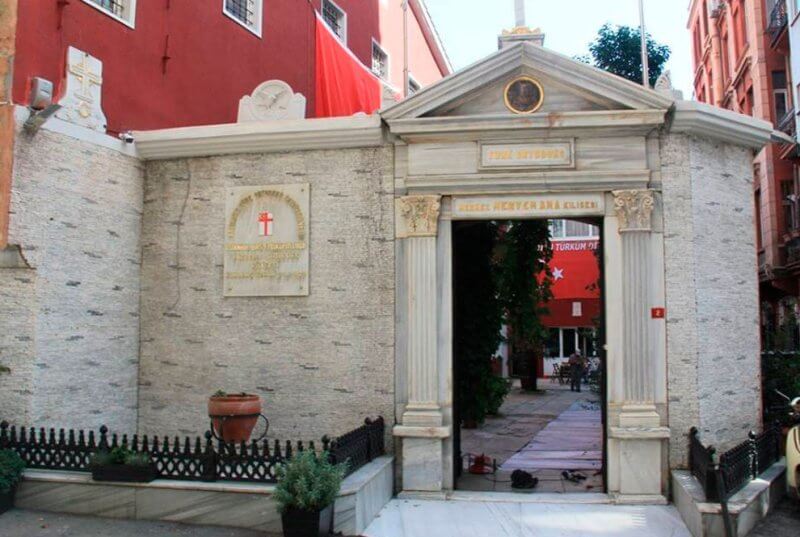 In fact, it is a whole complex, which includes a mosque, a hamam, a madrassah and a fountain. The complex is one of the works of Turkey’s most famous architect Mimar Sinan, built at the request of Kılıç Ali Pasha. Who was this man? In fact, he came from Italy and his former name was Giovan Dionigi Galen.

At a young age in 1520 he was captured and worked long hours on the galleys, and then became a Muslim and took the name Ali. In his early years as a pirate, he conquered many ships and took part in hostilities. Then promoted to captain and the last years of his life he settled in Istanbul. Kılıç Ali Pasha wanted to build a mosque named after himself, so he went to ask the sultan for permission. Having received his approval, Kılıç Ali Paşa chose a bay on the Tokhan coast and built a mosque there that resembled the Cathedral of Sophia in miniature.

The mosque and the hamam are still in operation. And restored and renovated in 2012, the hamam is open to all comers. 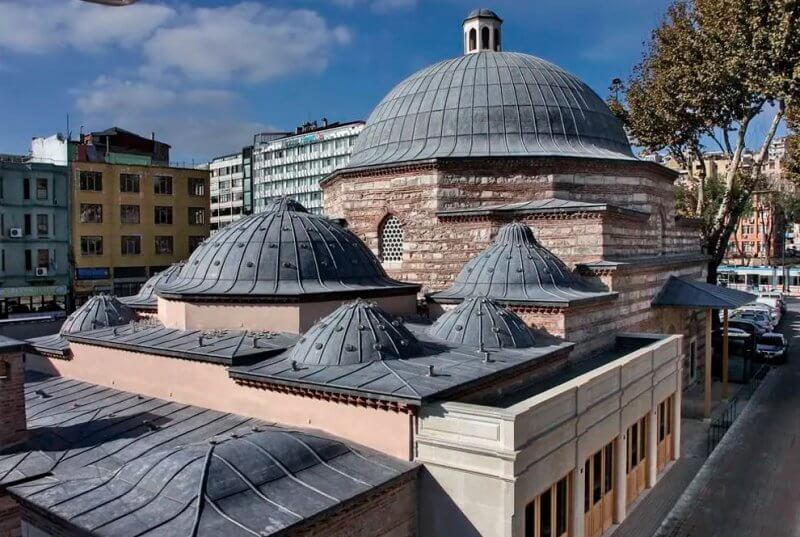 The places to visit in Karaköy include the French Passage in its list. Passage is one of the first buildings in Istanbul built in the neoclassical style. The date of construction of the gate is listed as 1860. The building was reconstructed with a restoration begun in 1992.

The French Passage was built to bring together French sailors and merchants. This part of Galata was the home of French merchants, and a market was held every Wednesday. It connects the French Passage Kemankeş Street (former Customs Street) in the Kemankeş neighborhood of Karaköy with Galata Mumhanesi Street. Its main entrance is Kemankeş Caddesi no. 53, the second entrance is Galata Mumhanesi Sokak no. 116. The original inscription “Cite Française” can be read on the medallion on the door pediment on the Kemankeş Street side and the recent inscription “French Passage Business Center” below it.

Not far from the French Passage on the right-hand side you can see the Omer Abed Khan building. This hotel is actually one of the first shopping centers of the city. Today this hotel is used as an electronics market, but continues to grace the streets of Karaköy. 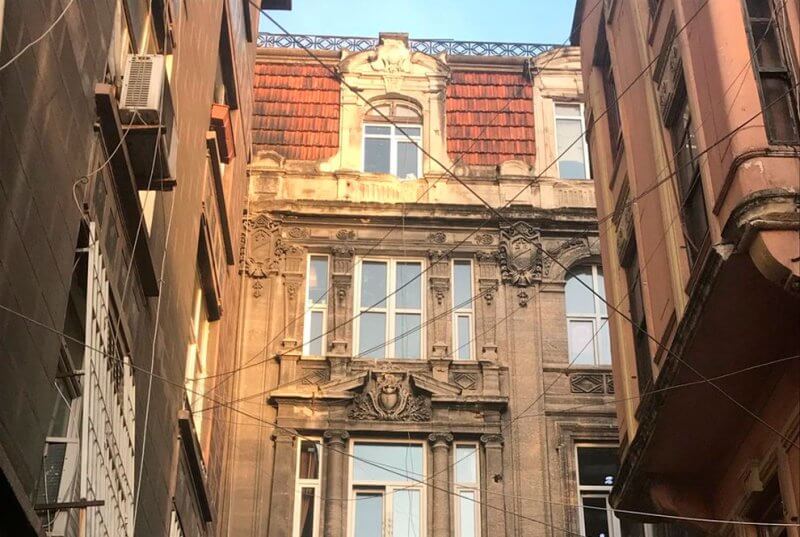 The sights of Karaköy include the streets, where there is an active life not only during the day but also at night. The neighborhood is a place to meet friends: numerous bars, cafes and coffee shops are particularly original. And umbrella streets, graffiti on the walls, and boutiques with products by local designers complete the image.

Istanbul’s new location, Galataport, which we recently told you about, is adjacent to the historical landmarks of Karaköy, such as Tophane Square and the Clock Tower. The Tophane Clock Tower is one of the oldest of its kind preserved in Istanbul. Built in the Neoclassical style, the tower was originally located on the seashore.

Over time, the clock tower began to tilt at an angle of 12 degrees to the sea because of its weight, thus resembling the Tower of Pisa. Over time, the tower went partially underground and it took very painstaking work to restore and raise it. Over the years the Tophane Clock Tower has witnessed the first step of visitors to Istanbul after a long sea voyage. Today it is not only a symbol of Galataport in Istanbul, but also a hint to visitors that the city has much to explore. The Tophane Clock Tower is located in the center of Istanbul’s first museum square, between the Istanbul Museum of Modern Art and the MSGSU Istanbul Museum of Painting and Sculpture. 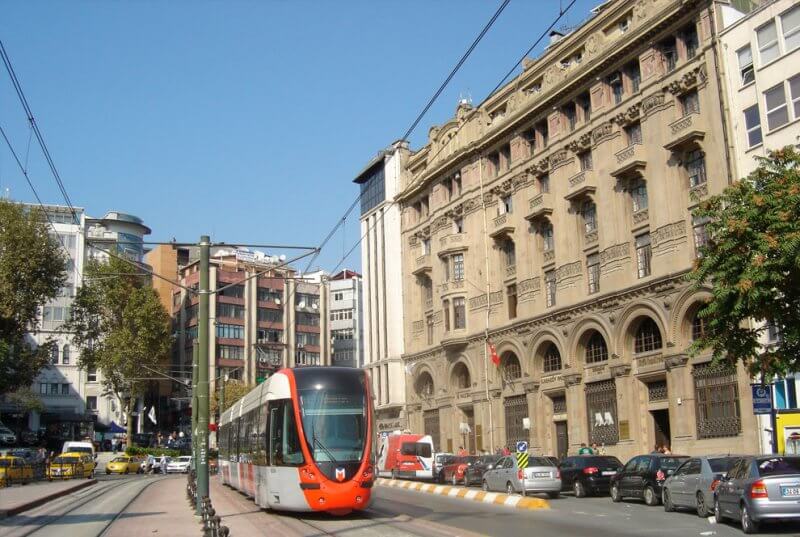 To summarize, the sights of Karaköy may seem insignificant, but are definitely recommended to visit. Go to this small port area to walk its streets and at the end spend time on the shore of the Bosphorus, enjoying the scale and beauty of Istanbul